None of this, mind you, was for dinner. It was all destined for CBC, foodstyling gigs and a cooking class, all of which happens tomorrow. If I may be allowed to complain for just a minute, I’m totally exhausted and my back hurts. And I have to be up again in 5 hours.

If I hadn’t made a batch of this Tuscan soup yesterday, it would have been toast and peanut butter all around. Fortunately, I hacked all the requisite vegetables into the pot as I unpacked produce from the market, with the directive of leaving it overnight to bake again today. That’s right, baked soup. And it really wasn’t so much a soup as a stew. It could, in fact, be more accurately labelled bean & vegetable stew – the chunk of bread, although interesting, does not define it, and in fact makes it sound far less healthy than it actually is. It has beans, and cabbage, and greens, and carrots, celery and potatoes, besides the bread. I added twice as many tomatoes as the original recipe called for (a cup just wasn’t enough to get it going, so I added a large can of plum tomatoes with their juice, and chopped them up with my stirring spoon) and poured in about half a tetra pack of chicken stock. And because I only had a cup of dried white beans left, and no canned, I soaked and added the cup and didn’t puree any at all. It was perfect, actually. Definitely a stew, and a not very soupy one at that. 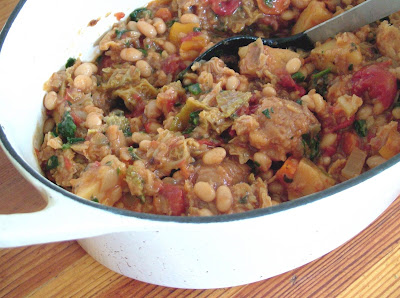 I came across it while perusing Saveur’s French onion soup, and was intrigued not only by the photo but by the double-cookedness of it. Yesterday I had very low hopes for it (Mike ate some while I was at my sister’s house and was far from impressed), but tonight I decided it has potential. It needs garlic. And herbs. Definitely garlic. Maybe some chiles. Or sausage. But tonight after it was baked it was just fine sprinkled with freshly grated Parmesan – I scooped mine over the last of W’s rice he couldn’t get up with his fork.

2 potatoes, peeled (or not) and thickly sliced

1Cover the beans with twice as much water in a pot; soak overnight or bring to a simmer, then turn off the heat and let them soak for about 2 hours. Bring to a simmer and cook for 30 minutes, or until al dente.

2In a large pot or Dutch oven, heat a good drizzle of oil over medium heat and saute the onions for about 10 minutes, until soft. Add carrots, celery, potatoes, chard and cabbage. Add tomatoes and stock, cover, and cook for about an hour, until everything is soft.

3Tear the bread into chunks and add it to the pot; stir and return to a simmer. Cook for about 10 minutes, then season with salt and pepper. You can serve some of it at this point if you like, otherwise let it cool completely and refrigerate.

4The next day, preheat oven to 375º. Heat the leftover soup in the casserole (I did it in my Le Cruset-style pot) in the oven, uncovered, stirring occasionally, until heated through, about 1 hour. For the last 30 minutes, do not stir; let soup brown lightly.

5 Drizzle with olive oil and serve.

Day 281: Room Service at the Matrix

Love is all that really matters. #globalpride #pri

Not really concerned about running into people at

Happy day, Dads. And a shoutout to mine.. I’m so

When life pummels your garden, make pie. (How-to i

So here’s something amazing. Starting tomorrow,

So much love for Mrs Noorbanu Nimji, a true Calgar

This error message is only visible to WordPress admins


Error: API requests are being delayed for this account. New posts will not be retrieved.

I have a newsletter!

looking for a recipe?

Find my recipes from the Calgary Eyeopener!